Maury manual tuners are based on precision slide screw technology that utilizes broadband slab line transmission structure and passive probes to create impedances for devices. The probes are designed to be very close to onequarter wavelength in the linear dimension at the mid-band of each range. Since each tuner has two probes, this results in improved matching characteristics for each unit. Another key feature of this series of tuners is the inclusion of a LCD position readout of the carriage position on those units operating below 18 GHz. Higher frequency tuners utilize a micrometer carriage drive.

The positional repeatability and high matching range of these tuners make them ideally suited for use as a variable impedance source in applications like device characterization. Such measurements depend upon the ability of the tuner to establish impedances out near the edge of the Smith chart and to reproduce the electrical characteristics as a function of mechanical position. The tuners in this series are also easy to use due to the nearly independent electrical results of the mechanical motions. The depth of penetration of the probe into the transmission line determines the magnitude of the reflection, while the position of the probe along the line determines the phase. While there is some interaction, the effects are almost independent of each other. 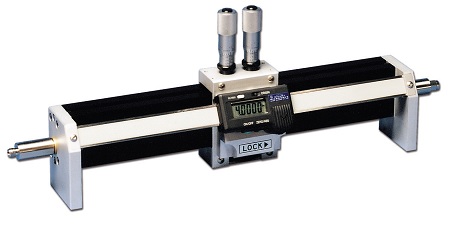