IVCAD advanced measurement and modeling software, offered by Maury Microwave and AMCAD Engineering offers a modern and intuitive basic visualization package for IV, S-Parameters and Load Pull data. Dockable windows allow users to create and save custom IVCAD environments. Templates allow users to save their preferred visualization graphs and recall or share with colleagues. Data Editor allows users to create new parameters based on equations and visualize alongside measurement data. Export allows users to save graphs and plots as JPG or PDF files for reporting. Visualization is compatible with Maury Microwave and common commercial data formats. 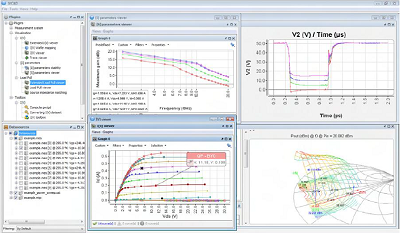 MT930B2 is an add-on module for MT930B1 which enables advanced visualization capabilities including:

Extended IV Viewer – enables users to visualize a transistor's pulsed IV characteristics versus time. This is useful in observing dynamic self-heating in the saturated region while moving different time markers. A second use is to determine the ideal measurement windows, i.e. the steady-state measurement area, so that the measurement data is not recorded in an area of overshoot or ringing. This is critical in defining the minimum pulse width for any given measurement, since the ideal value is tied to transistor size, bias tees, cables, etc, and can only be determined by visualizing the shape of the pulse over time. 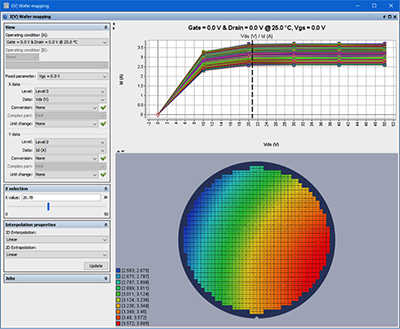 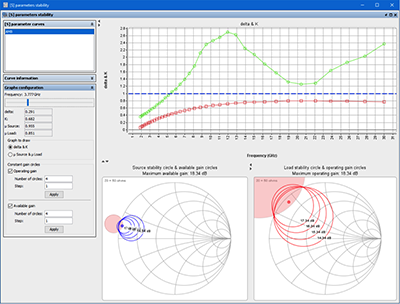 
Extended Load Pull viewer – enables users to dynamically plot XY graphs and Smith Chart contours based on a dependency variable, such as input power, output power, gain compression, efficiency or EVM. The viewer links two independent plots, such that the first plot is used to determine the dependency value, while the second plot is automatically updated as a function of the dependency value, and can be customized on the fly. Extended Load Pull viewer is invaluable when sorting through large sets of measurement data, such as nested measurements (i.e. load pull over a region of the Smith Chart, while sweeping power at each load). 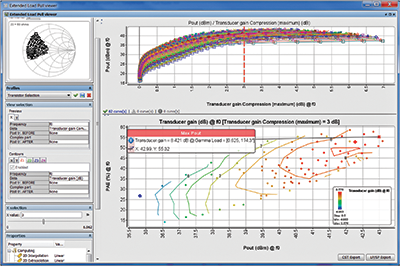 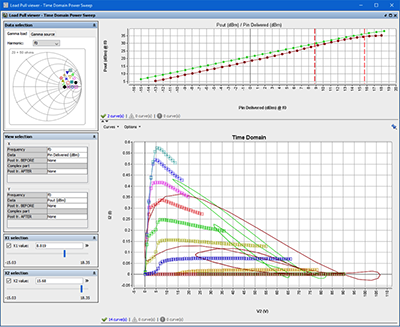 
Magic Source Pull (Source Pull Converter) – Large signal input impedance can be found by measuring DUT a- and b-waves at the DUT reference plane. A patented technique simulates source matching, without varying the source impedance. Even under extremely mismatched conditions this “virtual source matching” is highly reliable, provided the DUT is sufficiently unilateral (S21~ >S12+50dB). Simulated source contours are drawn, and trade-offs between maximum gain, efficiency and other parameters can be viewed in real-time without multiple source-load measurement iterations. Direct computation of the input VSWR versus source power and source impedance is also enabled. 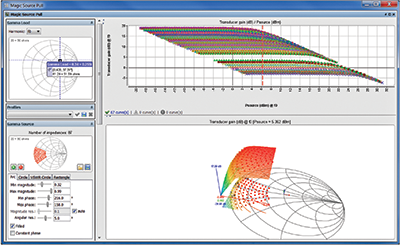